State of the Donut

January 28, 2011
Dear Members and Constituents,
As I listened to the state of the union address this week and tried to chew on the quick barrage of media bites, one got stuck between my teeth. “We need to out-innovate, out-educate, and

out-build the rest of the world.” There appears to be a deliberate asymmetry about this statement which feels off. All three actions start with the word “out”, but only two of them have three syllables and rhyme. Out-fabricate would have met these criteria for the third, but I presume it was ruled-out as too cutesy. Out-make does not have the three syllable word, it adds an imperfect rhyming sound, but I presume it’s not macho enough. I suppose “build” has such a different sound that the abrupt end to this string of words makes it less ignorable. I have paid no attention to the follow-up press coverage so I’m not sure whether the sound bite lived-up to it’s ultimate intent (to be eaten-up by the media). Another thought that crossed my mind was to wonder how Friday Donut Club state of the union address would sound. I suppose it would have to go something like…
This morning I would like to begin by congratulating the men and women of the Friday Donut Club. Our scrawny band of fried dough aficionados has continued to exhibit the attributes which have made the United States a great nation. 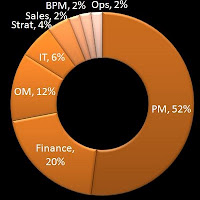 Our club’s strength comes from the diversity of it’s fifty members. We span nine pods, three buildings and eight functional areas. It should come as no surprise to you that 48% of our members are not in product management and 46% are not in 32C. While our diversity goal could be greater (we should aspire to have members in building 1000 –it’s not enough to have former members there as well as current members who were formerly in that building), we should also be proud of where we are. Our club is strong and you should be proud to be part of it.Short and sweet… like our donuts. Speaking of donuts, this morning Rich Law delights us with four dozen delicious LaMar’s. This morning, I challenge you to out-create, out-caffeinate and out-donut your peers.
Happy Friday!