March 18, 2011
Dear Members and Constituents,
With March Madness in full swing, I have a confession to make: I don’t follow college basketball but do participate in the occasional office pool. My bracket completion method is rather straightforward: teams with lower numbers in front of their name advance to the next round, with the exception of eight seeds. As for the final four, I figure alphabetic order or a coin toss are as reliable as Google (and a lot less effort). I might find myself a bit more engaged if instead of institutions of higher learning, the tournament involved institutions
of sweeter leavening. Replace baskets for donuts and basketballs for donut holes and you’re onto something. With 50 members, our donut club could support 10 teams (not enough for a sweet sixteen, but we do get a play-in). The good news is everyone on the donut club gets to play (no arbitrary CU-like controversy). Today, on her final day as donut girl, Shiri Bahar sets-up an alley-oop for you to complete the slam dunk with one of the #1 seeds on this bracket, LaMar’s Donuts. The ball is in your hands. 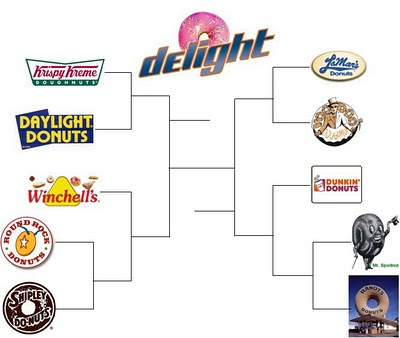