November 17, 2017
Friends,
With tax reform high on congress’ agenda, I’ve been thinking about how and why the government gets and spends money. In the U.S., the federal government  gets most of the money from various taxes (the rest, about 15% comes from borrowing). So, when it comes down to it, we’re buying a common good, the “things” (goods and services) on which they are spending our money. Most of it (65%) goes towards Social Security, unemployment, Medicare, health and veterans’ benefits. Another 15% goes towards the military and 6% goes towards debt and interest. The remaining 13% goes to everything else (for the OCD among you, I realize my math only adds-up to 99%, but that’s due to rounding). If you think of this as an income statement, then lower prices (a lower tax rate) will translate to less revenue (taxes) unless you can get more unit sales (a higher GDP growth rate). On that latter point, the U.S. economy has grown an average of 1.9% in the 2000s. Proponents of the plan say growth would go to somewhere between 3 and 5% and, according to estimates from experts, it would need to go to 7% to keep “revenue neutral”. So, even if the economy does grow in the range estimated by those proposing the plan (which should be taken with a healthy dose of sodium), the government will either need to cut their spending or borrow more. If, even by the most generous estimates, congress is planning to give our government a pay cut, I wonder which things they’ll decide to stop buying on our behalf (or whether we’ll just kick the can and increase our credit card spending). Fortunately, donuts are not one of those things that might be on the chopping block. So come get yours. There is even a congress emoji donut you may recognize --even though it’s been a tad smashed (see if you can identify it from this line-up). 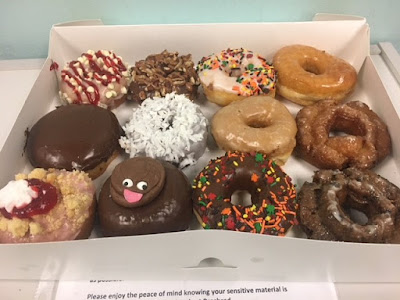