Things are not always as they appear. Take the Huntress Security slogan: "built to take you farther." I often misread it as "built to take your father". While taking your father may take you farther (especially if he pitches-in for gas), I don't think that's what the company had in mind. Or ,when someone refers to themselves as a "serial entrepreneur", my thoughts turn to W.K. Kellogg, the original cereal entrepreneur. Imagine if he had founded several competing enterprises.., he'd have been a serial cereal entrepreneur. Two horse-themed football teams incapable of scoring touchdowns may seem similar. So, why did the Bentonville* Broncos' overtime defeat last night grate me so? These were some of my thoughts when I was greeted by a sign that read "runnin' has its rewards". I know, I thought, that's why I'm a runner. It helps release stress, puts me in a better mood and makes me feel healthier. Somehow I don't think that's what Dunkin' meant when they printed that banner. Makes me wonder how many other misreads slipped my brain's defenses undetected, and are now "truths", waiting to embarrass me at the wrong time. I suppose it comes with the territory. Has any misread or misinterpreted text (intentionally or otherwise) made you smirk lately? 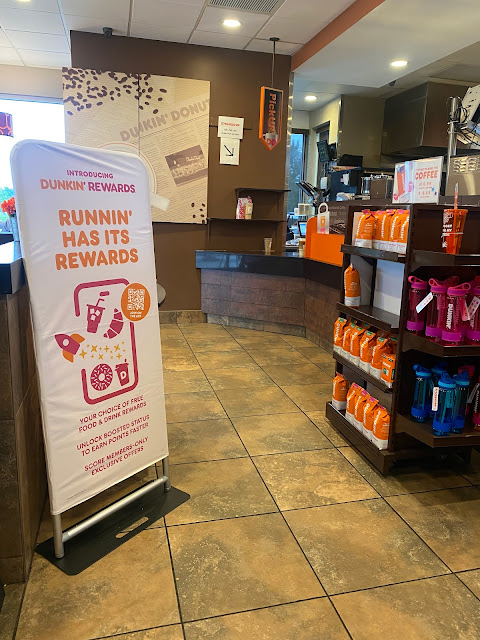 Happy Friday!
* The Denver Broncos were recently acquired by the Walton-Penner group, led by Rob Walton, a major stockholder in Walmart, which is headquartered in Bentonville, AK