This week, Earth’s population symbolically crossed the eight billion inhabitant mark. This is an estimate, of course, it’s not like Big Brother has an exact tally of all the arrivals and departures from this planet, so we don’t know for sure who the eight billionth person was–that would be creepy. Although, it could also provide great promotional opportunities. Baby Kim Chin, born at 5:47 AM Tibet standard time on November 15th, 2022, might appear on the cover of Cracked Magazine or receive a lifetime supply of free Krispy Kreme donuts; the accident of her birth’s timing making her an instant global celebrity. Still, creepy!

Speaking of creepy, I read somewhere that if you smooshed us all together into a giant sphere, the ensuing meatball would have a 1 Km diameter (granted, that thought experiment was done when there were 7.88 billion of us, but what’s 122 million among friends? While this may not seem like a lot, you’d need to meet five new people every second, 16 hours a day, over 76 years to greet all your fellow humans. That leaves eight hours a day to sleep, eat and poop –I’m not a monster! If you’re worried about overpopulation, don’t. The UN, which has the highest estimate, forecasts human population will peak at 11 billion around the year 2060 and then flatline (other estimates have lower peaks and declining populations after that point). Population dynamics being what they are, the outcome is fairly certain, so grab yourself a hot cup of coffee, bite into a donut and enjoy the show. 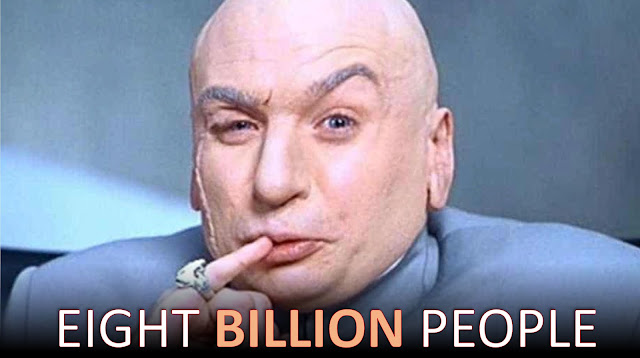