August 22, 2008
Dear Members and Constituents,
As the Games of the XXIX Olympiad wind down, it appears I have developed an immunity to the Olympics bug. There, I said it! Sure, I heard of Michael Phelps. Ate gold medals! (OK, bad joke). I even caught a glimpse of several media-selected sports in which the U.S. had strong gold medal aspirations (and for all I know got them), and was disappointed that the 20K men's march event --where Ecuador won a silver medal-- was not broadcast because no U.S. athletes were in contention. However, it is far from an all-consuming addiction. Lots of world records being broken in water sports... yeah, yeah, yeah, yeah. Failed baton passes... huh? 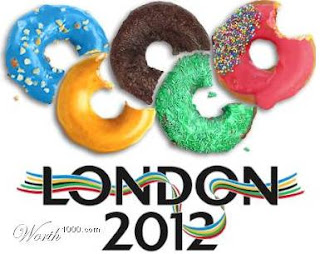 I suppose that is why, as some of you have correctly pointed-out, despite the ripe parallels between Olympics and donuts (Olympic rings resemble donuts, medals are round, China has 48 gold medals --that's four dozen, etc.), the topic has been absent from this forum. A deficiency I intend to remedy immediately.

In the Olympic spirit, and with the near-certainty you've watched every event (available on U.S. media, that is), I've prepared a Q&A that strays a little bit off the beaten path. Perhaps you were asking yourself some of the same questions:

With little hope of ever becoming an Olympic sport, you may be asking yourself why you have been "practicing" donut consumption all these years. Actually, come to think of it, you're probably NOT asking yourself that question, after all, donut consumption is its own reward! Today, Ed Stocker our best hope for a gold medal if/when we get a slot at the Olympics delights us today with a broad selection of delicious confections. So without further delay, on your marks, get set, go get yourself a donut.
Happy Friday!

February 11, 2022
Friends, You know life is good when even dinner smiles at you. That said, digging into smiley soup can pose a dilemma. At a conscious level, you know it’s just inert food. Inanimate, unsentient, incapable of emotion or feeling. Still, those cute cross eyed egg eyes and that little pepper smile are saying ”I’m your friend” —and friends don’t eat friends. Naming your anthropomorphic dish only makes matters worse. Eventually, being the monster I am, hunger wins. Mmmm, delicious! (Sorry, Sally). Speaking of which, maybe skip the smiley faces on that next dozen donuts. Happy Friday! ;-)
Post a Comment
Read more