August 10, 2012
Dear Members and Constituents,
This week, the most complex and expensive Mars mission to-date successfully landed on the red planet. Some of you may have, understandably, been too distracted by the Olympic medal race between the U.S. and China to notice, so I have taken the liberty of summarizing the news (by the way, this is one of those rare occasions where the line “were you on another planet?” does not have the desired effect). NASA’s six-wheeled car-size rover made an entrance in dramatic fashion, borrowing a page from Hollywood with seven minutes of terror, during which it transformed its shape five times and stuck a landing in a routine that would make any Olympic gymnast jealous.

In an ironic twist, the first surface image to be sent by the rover –whose mission it is to search for signs of life—showed what appears to be a dead cat. During a hastily arranged press conference to explain this discovery, Dr. Fick Sho-Nahl, an exobiologist at NASA’s JPL indicated “the current hypothesis as to the unfortunate mishap involves the Martian feline being lured to the site by the heat shield’s glow, only to be smothered by the rocket engines delivering the vehicle to the surface. On the bright side, our search for life in other planets is an unqualified success.” Having discovered (and ended) life so quickly, the 17 camera array, lasers and radiation detector on board this nuclear-powered mobile lab now seem like overkill. Speaking on condition of anonymity, another source at the space agency acknowledged that “in hindsight, we have long known the red planet’s surface resembles a giant litter box, so it makes sense that cat-like creatures would evolve here –after all, they can ‘go’ wherever they please.” 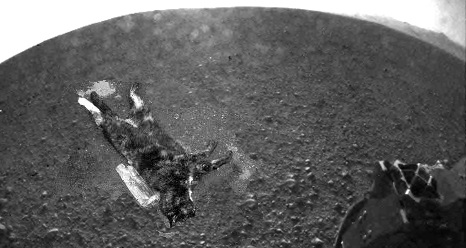 Obviously, if the cat references in the preceding paragraph were true, you’d see a lot more coverage in the news. Still, wouldn’t it be cool if Curiosity did find life? (almost as cool as, say, a taxidermy cat helicopter scaring some cows to the tune of Airwolf –a must see video if you ask me). As it stands, the closest I expect we’ll get to finding life is a false positive from the Teflon in one of the instruments. And while Curiosity’s tires can’t go flat, that was unfortunately not the case for Satinder Juneja’s automobile –which explains the slight delay this morning. Fortunately, you don’t have to travel cosmic distances to find a sign of these donuts, so come grab one. While you’re at it, maybe we can chat for a bit – unless, of course, the cat ate your tongue.
Happy Friday!

Disclosure: I am admittedly not a cat person, however, no cats were harmed in the production of this message nor, to my knowledge, by NASA’s Curiosity mission.