August 17, 2012
Dear Members and Constituents,
As the London Olympics came to a close last Sunday, one could almost hear a collective sigh of relief coming from the international Olympic committee. Relieved the games went well; relieved, of course, there were no Spice Girl wardrobe malfunctions, but most of all, relieved folks can still read roman numerals (can you imagine if people started referring to the event as "the games of the triple-X Olympiad"?). And while NBC attempts to remember life before becoming a sports network, Río de Janeiro braces for two world-class sporting events over the next four years. As for me, the fact Harry Potter’s home country failed to add Quidditch as a medal sport felt like a huge missed opportunity. An opportunity the city and county of Broomfield should seize immediately. Come to think of it, Broomfield would be the perfect place to have a Quidditch match (broom-field, get it?). It may be too late to submit a bid for the 2020 summer games, but timing is perfect to start preparing for 2024 (the XXXIII –pronounced triple-X, ay! ay! ay!—games). Granted, there are those who say host cities never recover the costs of putting-on the show (economists, mostly), but fiscal responsibility is out of fashion these days. Besides, wouldn’t it be fun?

Speaking of fun, Curtis Crawford (donut boy, center) delights us this morning with four dozen donuts. So grab your broom and fly on down. If you’re like me, that first bite will sweep you off your feet.
Happy Friday! 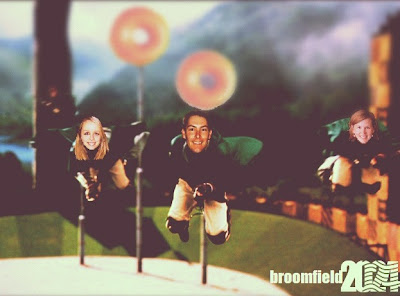 P.S. The observant amongst you may have noticed Sara Baack is also part of the Quidditch team pictured (a humble tribute to a fearless leader who this day, due to force majeure, becomes an FDC alumna). Congratulations and farewell!