Honk if you Love Dounts 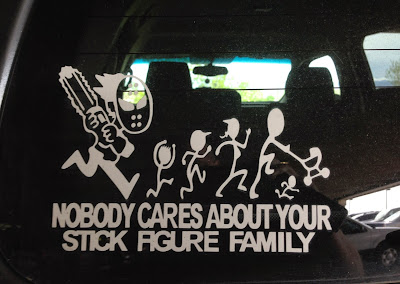 Dear Members and Constituents,
A car parked at the Level 3 garage (pictured) got me thinking about bumper stickers. Yes, bumper stickers, that passive-aggressive way to share something about yourself with your fellow commuters. Peel the backing, place the sticky side on your car and voila! You’re ready to show support, boast membership, crack an inside joke or mock others’ views. Permanently. Indiscriminately. Bumper stickers are a convenient means to broadcast your politics (for or against), national origin (pick an obscure three letter abbreviation), sport (26.2, 13.1 or 0.0), beliefs (fish, with or without legs), what you’d rather be doing (catching fish, preferably of the legless variety), advertise a product, or share how your group “does it” (can I get one that says “Level 3 employees do it around the corner or across the globe”?). There are even donut bumper stickers. You have the classic “bad cop, no donut” (because, let’s face it, there’s no way you’re getting off with a warning) and Voodoo Doughnuts has one that reads “the magic is in the hole” (yeah, not getting one either).

One major draw-back with bumper stickers is the lack of an “ACK” to your proverbial “PING”. For the most part you don’t know whether or how your message has been received (I suppose the “honk if” genre circumvents this pitfall and there’s some debate as to whether hand gestures count as feedback). Even so, for the most part, if the only other Norwegian Grateful Dead fan in town who runs ultra-marathons, hearts Chihuahuas and gets gassy when people drive too close behind them is directly in front of you, there’s no practical way for you to connect. Given the limitations, I admit I don’t fully understand this compulsion to self-vandalize our own vehicles. Perhaps the satisfaction of telling the world you have an Apple computer is its own reward. Then again, if you live in Boulder and drive a Subaru, I think there’s a law mandating you must have no less than four bumper stickers (preferably political in nature). As for Jeep drivers’ self-evident bumper stickers, I’m sure I wouldn’t understand.

In any event, whether you are a tree-hugging, welfare-state, Huffington Post liberal or a gun-toting Fox News conservative who’s proud of your gas-guzzler (or somewhere in the middle), it’s comforting to know the back side of your car can scream these and many other messages to your fellow drivers with little fear of repercussion. It’s also comforting to know Igor Nikolic (donut boy) has delivered four dozen delicious donuts to Ed Stocker’s desk (who is out for a second consecutive Friday). So come enjoy some peace, love and donuts. Hey, that would make an awesome bumper sticker!
Happy Friday!