Friends,
As both a science afficionado and a news junkie, the thought of a 24 hour news cycle conjures memories of the water, carbon and nitrogen cycles. Of course, once that notion was planted in my head, I was compelled to draw it out (a picture is worth a thousand words).
The process begins and ends with the commentator who anchors (pun intended) two distinct sub-cycles  which are established based on the relative distance of reported events from your home: local (i.e. near) and global (i.e. far). The local cycle is tailored to your surroundings and while you might be forgiven for assuming it’s relevant to your daily life, the reality is it is mostly comprised of fluff, fleeting information and is full of itself. Then there’s the global cycle –granted this is a generous label –you’ll notice the U.S.A. is bigger than the rest of the world (i.e. “scary places”) put together. This larger cycle has spin as the dominant natural force and its direction –clockwise or counter-clockwise—will depend on the media outlet’s politcal leanings and agenda. The global cycle exposes us to the highly entertaining political circus, things to geek-out about (my favorite), the media’s pet topics, a reason de jour to be terrified of the rest of the world and some mumbo-jumbo about gravity’s effect on the Dow, Nikkei or Footsie. Come to think of it, the news hasn’t changed all that much since Mssr. Jefferson made his observation. 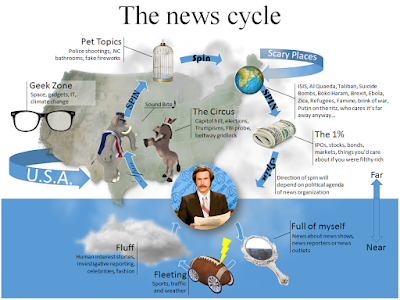 Unfortunately, donuts were reportedly invented after our nation’s 3rd president’s passing, so there are no clever Jeffersonian quotes we can use for the call to action today. Instead, I have breaking news. The Donut Bar has closed it’s doors forever, so I took a detour to a new place for today’s dozen: P F Donut Shop (a hole in the wall in five points). Give them a try and let me know what you think. Finally, I bid you adieu with one of my favorite quotes about donuts.

“The optimist sees the donut. The pessimsit sees the hole.” –Oscar Wilde