The Dark Side of the Eclipse


Friends,
What are your plans for today’s total lunar eclipse? The blood Moon and Mars in opposition promise to deliver a spectacular show. If, like me, you didn’t plan ahead and book a ticket to the other side of the pond, you’re probably just working –like me! If you thought there was nothing you could do to about it, I have a few ideas so you don’t completely miss-out on this historic, “once-in-a-lifetime” cosmic event.
Ah, if only our planet was shaped like a donut. The Earth’s core wouldn’t block our view! Then again the sunlight coming through the donut hole would probably destroy the effect. As an aside, if you believe the Earth is flat, the moon landing was a conspiracy and Europe is a fictional land where fairies and leprechauns wander free, you should imagine a 45 RPM record instead of a donut in the preceding sentences. Still, whether you’re a flat-earther or a globularist, I think we can all agree donuts are delicious. So enjoy one, it’s not like you’re missing the longest eclipse of the century –actually, about that… yeah, enjoy the donut.
Happy Friday! 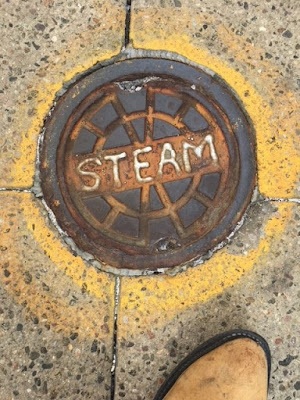 P.S. Here's a photo I took looking down towards the lunar eclipse