Why do we have states? I’m not talking about states of mind (thinking, engaged, critical and autopilot) or states of matter (solid, liquid, gas and plasma). I’m not even talking about sovereign nation-states with firm borders, currency, armies and a shared cultural identity. I’m talking about the “S” in “USA” – the vestigial states that make-up this great nation. Having been United for nearly a quarter of a millennia it’s hard to think of states as little more than accidents of history and geography. Granted, when traveling to Alabama one does feel a tad foreign. Still, looking at a map, it’s hard to comprehend how Alaska, at over 550 times the size of Rhode Island, can be in the same category. Sorting by population closes the gap, but still, California has nearly 70 times as many inhabitants as Wyoming. Then there’s Puerto Rico and the other territories. They get one non-voting house representative and zero senators. Talk about taxation without representation! I think it’s time states provide us with a little more entertainment value to justify their existence. Here are a few thoughts. 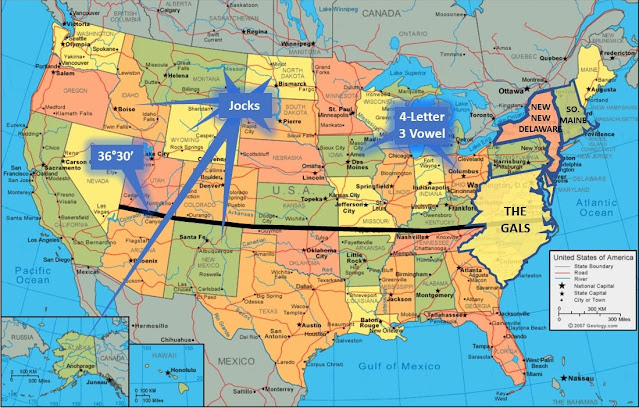 Much as it irks me to admit it, I suppose in the end the best analogy for these United States might be the bones in the cranium or the sacrum. They’re fused together and don’t have the range of motion of a femur (or even a dorsal vertebra). Despite these limitations, they’re technically still considered bones. Which reminds me, the solution to this bone-chilling cold snap is, you guessed it, a nice, warm donut.