May 27, 2011
Dear Members and Constituents,
They say any extreme is bad (too much or too little of just about anything can be harmful). If you doubt this conventional wisdom, just ask Osama Bin Laden (wait, you can’t!). Nonetheless, extreme positions and actions have a certain appeal. They are simple, straightforward and don’t require much thought. In-fact, some extremes can be pretty cool. If you doubt this, just ask any extreme sports enthusiast.
I witnessed an example of a cool extreme on Saturday. I’m talking about the stage for the U2 360° tour. It has a unique articulated circular video display made of 888 hexagonal LED screens which tends to make the unprepared concert attendee (i.e. me) do a double-take (wait, did it just do that?). The huge spider-like structure (aka the Claw), the light shows, the sound quality, the ambiance were all awe-inspiring, but are they worth the estimated $25 - $30 Million dollars the stage alone is said to have cost? I’ll let you be the judge of that. Then again, would the tour have grossed over half a billion dollars without it? 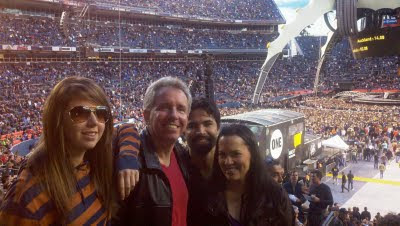 It turns-out donut extremists (people who cut-out donuts altogether from their diet) are doing themselves a disservice. As fate would have it, allowing yourself to have a donut a day is a better approach to eating and maintaining a healthy weight (take that Johnny Appleseed!). This morning, Chris Hynes (donut boy) delights us with four dozen donuts. So come on down and take advantage of this unique opportunity to balance your diet this morning… your health demands it.
Happy Friday!