Danny Trejo is arguably the ultimate typecast actor. While most thespians avoid being pegged, Danny has gone in the opposite direction. His 323 roles in movies, TV shows, videogames and music videos exude “tough guy”. You could say he’s made a career of playing the Chicano villain. Come to think of it, I suppose we all have a “type”, whether we care to admit it or not. Apparently, mine is “donut dude who drinks and knows things” –at least that’s what my family’s Christmas presents suggest. To wit:

I could try to fight it. Come to think of it, I have. Nearly a decade ago, my boss at the time (Shaun Andrews) suggested my role as founder and head of the Level 3 donut club might hinder my career growth. Was he onto something? Perhaps. His advice seemed prudent, so, I took his words to heart and transitioned the Friday donut club to Ed Stocker –a futile attempt to shed the jovial “donut boy” image. The failed experiment in sacrificing donuts for my career taught me that executive gravitas and donuts are not necessarily mutually exclusive. Sure, you don’t want to be perceived as someone who values comradery over results, however, the trust engendered by authentic engagement can be the foundation for tight-knit teams –teams that run circles around those held together by fear. At least that’s what I keep telling myself whilst biting into a chocolate glazed donut. What do you think? Well, whether you agree or not, I raise a glass (and a donut) to your health. 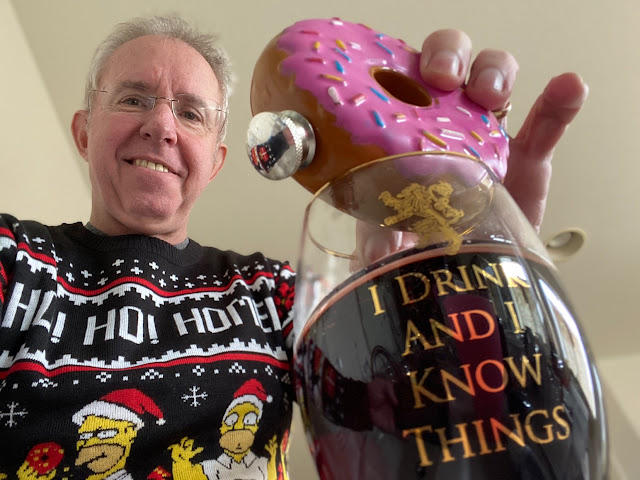 February 11, 2022
Friends, You know life is good when even dinner smiles at you. That said, digging into smiley soup can pose a dilemma. At a conscious level, you know it’s just inert food. Inanimate, unsentient, incapable of emotion or feeling. Still, those cute cross eyed egg eyes and that little pepper smile are saying ”I’m your friend” —and friends don’t eat friends. Naming your anthropomorphic dish only makes matters worse. Eventually, being the monster I am, hunger wins. Mmmm, delicious! (Sorry, Sally). Speaking of which, maybe skip the smiley faces on that next dozen donuts. Happy Friday! ;-)
Post a Comment
Read more