They say you learn something new every day (granted, when you’re my age you may have to forget something to make room for the new info). Just last week, despite living here for over twenty years, I found out Denver is the Queen City of the Plains. It happened as the consequence of a recent donut run to Pandemic Donuts –which disappointingly landed me at Queen City Collective Café (on a side note, the nom de plume used as visitor bait worked). Coincidentally, my colleague Steve Smith had visited Queen City Architectural Salvage earlier in the week – where he learned from the proprietor that the establishment was named after Denver! Pretty cool, right? So why does the grandiose moniker of “Queen City” have such a low profile? Well, it turns-out queen cities are a dime a dozen. There are 39 Queen Cities in the U.S. alone and no less than six abroad. Not as cool as I expected. Then again, maybe there is something we can do to bring some prestige back to the name. It occurs to me that with March madness over, settling the Queen City debate may be great fodder for a new tournament. In order to get to a manageable number, we can ignore the foreign Queen cities (sorry Auckland, Toronto, et al, you’re just too far) and those with no caveat (sorry, Charlotte and Seattle, you’re just too assertive) and focus exclusively on cities whose alter ego begins with “queen city of the…”). That brings us to eighteen contenders, of which we pick sixteen (sorry, Queen cities of the Ozarks and the Sound – maybe next time). The stage is set for the Queen City 16! I’ve taken the liberty of creating my bracket for how I think the tournament would play-out. The final four would feature the winner of each divisional grouping (to wit, water-themed titles, directional titles, topography-inspired titles and fun names). Denver’s route to the top starts with Sedalia, Missouri (queen of the Prairies) and goes through Helena, Montana (queen of the Rockies) to win the topographically themed queen division. Then, after a tough battle with Selma, Alabama (queen of the Blackbelt), the final showdown with Buffalo, New York (queen of the Great Lakes) would crown Denver THE queen city. As for the modality, I think a cage fight between mayors, as representatives of their proud people, would maximize entertainment value. 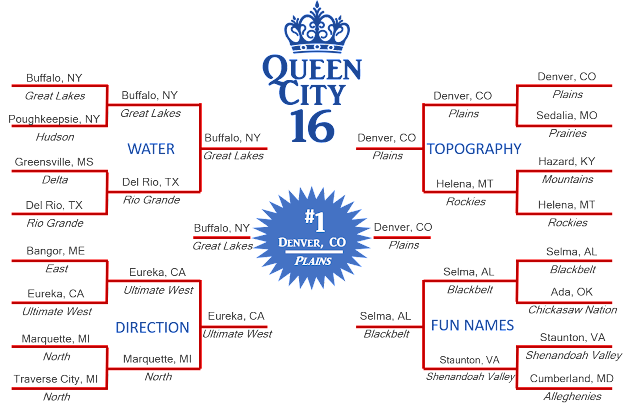 In any event, while the selfie by the Pandemic Donuts sign was not to be, at least I got a new piece of useless trivia from the trip – and donuts, can't forget the donuts!