I realize I’ve been on somewhat of a Mars kick lately – three red planet references in as many months*. Granted my fascination with the fourth rock from the sun goes pretty far back. I was notoriously the first (and perhaps only) person to report how curiosity killed the cat in 2012 – and have been guilty of intermittent allusions to Ares’ orb over the years. Unfortunately, as you surely already know, today’s reference couldn’t be helped. As evidenced by Percy’sǂ latest (and possibly last) mastcam HD image, it would appear a sandworm has prematurely cut the mission short. On the bright side, if confirmed, NASA is hopeful this could mean Spice Melange is real – which opens-up the possibility of drastic space travel acceleration by enabling safe spacetime folding (leveraging the Holtzman Effect)§. 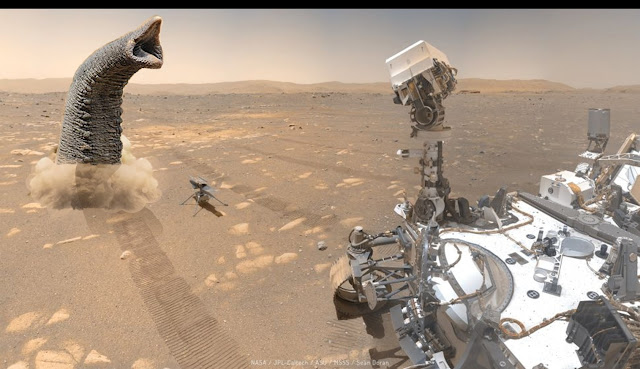 So, in the spirit of the day’s events, I have taken the opportunity to sojourn to Wake and Bake on South Broadway for a cinnamon crumb cake donut – and eleven of its best friends. All this talk of spice gave me a craving!

* Here are links to references 1 and 2, in case you missed them.

ǂ NASA has been trying to make the Perseverance rover more endearing by anthropomorphizing it, with a Twitter handle and the nickname Percy.

§ This sentence makes a lot more sense if you are familiar with Frank Herbert’s Dune universe. I recommend starting with Dune, the first book, rather than the prequel books. And, if you like Sting… actually… never mind!