With Trump forfeiting the second presidential debate, the clear winner in last night’s “game 2“ was the American public. Unless, of course, you tuned-in to one of the town halls to get some echo chamber reinforcement, in which case you have my sympathy. As for myself, I watched Django Unchained. As a form of escapism, nothing beats a good revisionist western, with Tarantino’s trademark excessive blood effects (seriously, Quentin must think of humans as blood sacks, ready to explode when pricked). Sure, the references to orthopedic inner soles (Dr. Scholl’s) and children’s games (Candyland) are too cute by half, still, my only regret is having waited eight years to premiere the movie. It occurs to me that if they ever remaster, re-release or redo Django, Dunkin’ should pounce on the promotional possibilities. They could of, course, temporarily rename the stores Django Donuts. Then, they could give their donuts nicknames to align with characters in the movie. The French cruller, could be named the “Monsieur” after Calvin J. Candie (Leo DiCaprio) who didn’t speak French, but liked their mannerisms. The Bavarian Kreme donut would be the Hildi, after Broomhilda von Shaft (Kerry Washington), Django’s German-speaking bride. The Long John could be the Big Daddy (Don Johnson), the treacherous apple fritter could be Stephen (Samuel L Jackson) and the powdered donut could be Bag Head #2 (Jonah Hill). Not to mention all the folks whose juicy heads were spectacularly blown off could be the eponyms for various flavors of jelly-filled donuts. Speaking of Dunkin’, you should have seen the line this morning. Better yet, here’s a photo where you can see the cars ahead of me and the cars behind, courtesy of the rear view mirror. Enjoy! 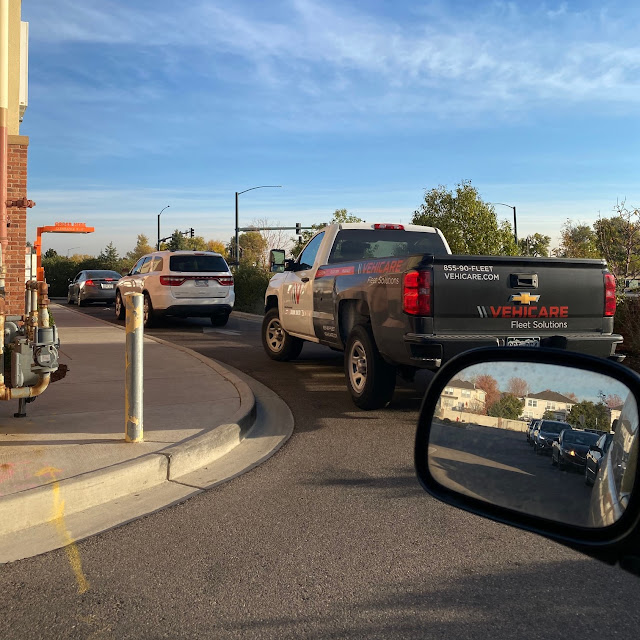